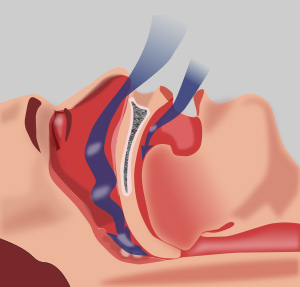 Obstructive sleep apnea syndrome (OSAS) is characterized by upper airway obstruction. Several factors can influence OSAS, including genetics, age, obesity, male and female menopause, snoring, alcohol and smoking. Men are much more likely to suffer from OSAS and it is often accompanied by gastroesophageal reflux. Over the long term, fatigue, drowsiness, depression, anxiety, morning headaches and insomnia are common.

A recent experimental study on OSAS was carried out by Richard (2011) in Abitibi-Témiscamingue, Quebec, on 26 medically diagnosed and monitored individuals. The study took place over a seven-month period and subjects were met a total of eight times. The target population, men and women, were between the ages of 25 and 65 and had moderate sleep apnea.

The specific goal of the osteopathic study was to assess the effects of providing osteopathic treatment to individuals suffering from sleep apnea for which they had been treated medically with a CPAP (continuous positive airway pressure) device for at least three months.

Significant results recorded based on validated questionnaires showed a decline in excessive daily drowsiness, reduced fatigue and fewer nightly apneic episodes among people with sleep apnea. These improvements enhanced the quality of life of the individuals in the study and increased their energy levels.